I have to start this post by getting it out there that although I’m blogging dinosnores, I wasn’t gifted this gig. Well, I was, but not in a blog sense. It was a genuine gift from a family member. Just Saying. But sometimes in life you just love something so much you genuinely want to scream about it from the rooftops right?

So, if you saw my instagram over the weekend you might have caught we were on a date night up taaaaan. That’s London. And, whilst I had the worst night sleep in AGES (and that’s saying something) it was also the best night I’ve had in AGES, if not ever.

Because we slept (well, not much sleeping went on) at the Natural History Museum in South Kensington, right underneath the Blue Whale (specifically under two giraffes in Hintze Hall). 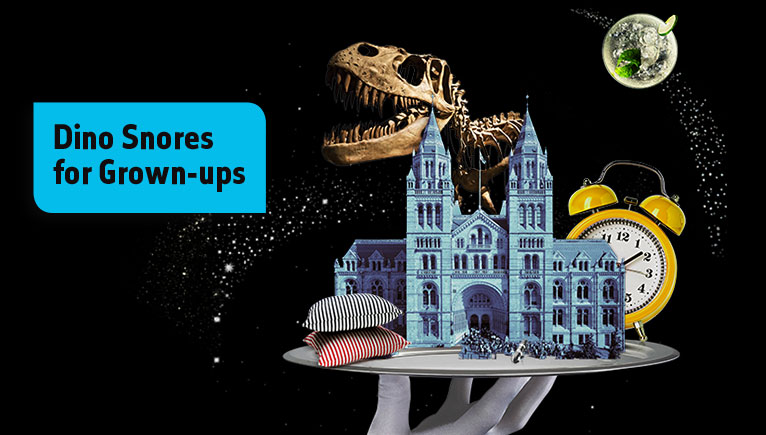 I had never heard of the #Dinosnores events before – these events run every other month or so, and are specifically for either kids or for grown ups. Tickets don’t come cheap, but I kid you not, this is a once in a lifetime opportunity that is worth every penny.

After meeting Dad Muddling Through on the platform at St Pancras Station, we arrived at the museum at around 6.30pm. After a quick security search collected our foam mat to sleep on, strategically picked out our spot (under the giraffes), and set up camp. You take along your own pillow and sleeping bags, plus your PJs. I also took a torch (not needed), a onesie in case it was cold (not needed, although I did wear it whilst wandering the museum!), water and a sleep eye mask (much needed!).

After a welcome drink at the fully licensed bar, we were introduced to our itinerary , starting with a three course meal in the restaurant area. Sharing our table with some amazing strangers who we quickly got to know and shared our life stories, hows and whys we all came to be there. The food was excellent – far nicer than I had imagined when we selected our options from the email weeks earlier.

At dinner we had an ice breaker quiz (very chilled sheets on the table) and a chance to plan out our evening from the lanyard itinerary we collected on arrival. I guess the kind of people who go to Dinosnores all have something in common – be it a bit of a science geek, a big kid or just a lover of dinosaurs. It wasn’t hard for us to all hit it off, and before long there was plenty of talk about big data, SEO and clinical trials.

Split into three or four ‘teams’ us T Rex’s all had a colour code and synchronised schedule – so we bumped into each other throughout the night. This system allows the 300 or so guests to split off into smaller groups and time slots for the varied events.

After dinner we hit the first scheduled item; a science talk on the mating and dating habits of spiders. The presenter Jan was absolutely HILARIOUS and the 30 minute talk was both fascinating and funny, as she had us all up dancing the spider dance. Jan was a total scream and this 30 minute talk was undoubtedly one of the highlights of the whole evening. Jan, I want to be your assistant spidergirl!

Strolling around the museum with all the exhibitions open at night was so surreal, and as we moved on to the stand up comedy section we were able to take in all the exhibits without so much as one nudge or shove, in fact, we often didn’t see another person. Wandering around with a beer in hand was also strange and kinda cool, although we made an executive decision early on to not drink too much, what a waste it’d be to not have a clear head on a night like this.

After the Ugly Animals comedy stint (also brilliant), we had one more scheduled event – the design a dinosaur. A really cool guy from ZooLab went through a series of Jurassic World themed links to his collection of reptilian pets and spiders. I had serious job envy, and his baby Chameleon stole my heart.

After the three 30 minute events, we muddled along (in our PJs) through all the other drop in sessions; bug tasting, gin sampling, dinosaur games, pub quiz and the monster movie marathon.

Making time to of course amble around the museum; the dinosaurs after midnight was something else. Plus the Venom exhibition, and Wildlife artist of the year were open for us to look through as part of the evening (normally paid entry exhibitions). The old favourites (the mammals section reminded me of being a kid again) as well as some new corners were all just incredible. We even found some of the exhibits we had seen on Attenboroughs Christmas episode of Natural History Museum Alive too.

Every single member of staff at the event was exceptional – helpful, friendly, warm and welcoming. From the security guards who chatted about their lives before NHM, the hilarious portuguese bar staff, the curators who we wished were our friends IRL and the event organisers who happily took a moment to guide us in person to where we were supposed to be. Hats off to to all of them pulling that night shift with a huge smile on their faces, totally adding to the feel of the evening.

As the small hours passed by, we spent some time taking in the sights from the top balcony, whilst a harpist began playing the Jurassic Park Theme tune – a moment I’ll never forget. So beautiful.

Eventually tiredness got the better of us, and after one last G&T we hit the sack, literally at about 2.30 am. Whilst the foam mat didn’t provide the greatest of nights sleep, there was no denying what the venue lacked in comfort, it made up for in grandeur.

After a few hours sleep we were woken by the sound of dinosaurs groaning, or perhaps someone snoring, but at 6.15 that wasn’t a bad effort (we have worse nights at home!). Just in time to chuck on some clothes for the 6.30 yoga session, stretching out those aches from the floor!. I loved the Yoga in the NHM corridor so much I’m determined to start Yoga again, after a six year break.

A cooked breakfast was served around 7.30, with some much needed coffee to fuel our journey home. Treasure hunt winners were announced, as were the social media best post winners, before the gift shop was declared open. Of course we picked up some bits for the girls and a thank you for our giver of our gift. The shop was a little bit too amazing, and I could have spent a small fortune on the shackleton range (and the kids cups ha ha!).

Time came to say goodbye before we knew it, and hanging on to every last moment, we reluctantly headed back out through the grand doors we had entered through just fourteen hours previously.

Ultimately, this experience is one you have to live and breathe yourself to believe it’s magnificence. Although I’m not writing this on behalf of The Natural History Museum, a huge part of me has been resurrected; the part that wants to work at the Natural History Museum when she grows up. Maybe this is as close as I’ll ever get, or maybe there’s still time…