As you know from Part 1; getting the plans in place and Part 2; Picking Packing and Panicking, we were all set to go.

It was April 20th 2015. Day one of our build that had been on our mind since we moved in three years previously. I hung around that morning of D-day to meet the builders before dashing off to reunite with the kids at Nanny & Grandads, well and truly out of the way.

Here’s a reminder of the kitchen as we knew it;

The guys arrived on time 7.30 as promised. We offered teas and coffees, awkwardly hung around in the background, giggled upstairs nervously, and watched in amazement as our existing kitchen structure was obliterated before 10.00 a.m. It made us realise what a flimsy structure it was, as it was broken up like Lego before our eyes. A good storm may have even done the job for us (thank god it hadn’t).

I set off around midday for a sleep over with the kids at the in laws, set to return to peep in at an update on my way in to a KIT day at work the following day. Mr G reported in that night that amazing progress had been made – this was really happening!

Its strange walking into your own house when it’s been overrun by builders; you feel like you have to knock on your own door, apologise for disturbing them, and swiftly get out of the way again. That Tuesday, I had the shock of my life when I realised that having removed the existing rear access to the house, the only way in for the builders was now via the dining room. AKA Our ‘clean area’, housing temporarily all the toys, kitchen plates, dining table I had planned to feed the kids at.

Worse still, the patio doors were wide open, whilst a cement digger smashed up the tiled floor and footings, so the girls things were now covered with a 2 inch layer of cement and dust. First mistake; there is no such thing as a clean area during building work, apparently.

After a stressed panicked call to Mr G we (he) later relocated the contents of the dining room to any available space elsewhere in the house. Namely our bedroom. Well, there was a bed somewhere in that room, it was a little tricky to find it.

Day 3, the kids and I moved back home. The builders had made a mini kitchen area, boarded off from the exterior building work, so we could continue our day to day lives, albeit compactly for the next 4 weeks or so, until the building work needed to impact interior walls.

I brightened the mini kitchen up a little, and actually fell somewhat in love with it.

The exterior ground work was impressive to watch , as were some of the builders (according to my friends and neighbours, honestly Mr G). The spring turned to summer and it was ‘Suns out, guns out’ central. We were very popular with visitors, coming to check out ‘the progress’.

Within a week we had foundations.

Three weeks; the beginnings of walls.

Four weeks; a space that resembled a room.

There were hiccups along the way, but the guys seemed to see solutions, not problems, and each one was resolved swiftly, never delaying the progress by much.

It turns out, our drain pipe from the loo didn’t lie where they thought it did, and it was smashed to pieces as they dug the foundations. Wish I’d known that before I came home and whizzed up the stairs, dying for a wee. I thought I might die of embarrassment when I realised the builders had just enjoyed watching a puddle of my wee spill out of the broken pipe.

Living amid the work with the kids was surprisingly okay. The builders were respectful of us being around, they avoided coming into the house unless necessary, kept doors closed, and had decent taste in music. They drank tea with sugar by the bucket load, but so do I, so we got on like a house on fire.

We were aware however, that the next step of knocking down our mini-kitchen, to complete the electrics, plumbing, structure of utility room & toilet, and hallway was on the horizon. The dining room also needed to be cleared completely to allow them to remove the existing patio doors and widen the space to create a open plan space.

We had already provisionally agreed that if the situation called for it, we could temporarily relocate to my in-laws with the children. Our youngest was only 6 months old, and our adventurous 3 year old has always suffered with asthma, so as soon as we felt it was too dusty we would be moving out. I was very clear that at no point could I exist making bottles of formula, sterilising, weaning, without a kitchen – boiling kettles for milk in the living room with Toddler-G on the loose was not an option.

Mid May, we had the 7 day warning, so we began operation move out. The girls of the family that is – Mr G would stay at the base camp, able to maintain his commute to London, keeping an eye on things, letting the builders in each day, and trying to stay on top of the dust control. Us girls were relocated 30 miles away, further away from daddy than we would like, but in the comfort of a spacious 4 bedroom, spotless home where we were treated like royalty, guests on honour…for the next 5 weeks.

Living with the in-laws, without the hubby,  could sound like a prison sentence to some. But, it was really Mr G who had the short straw. Our wonderful family hit the perfect balance of help and space, did all our washing & cooking, helped with the kids, and even had me a cold glass of sauvignon blanc waiting when I came down from doing bedtime. I returned the favour by keeping the chaos of the kids to a minimum – packed our stuff away and respected their home. Of course we missed Mr G desperately, but he joined us every weekend – long weekends due to bank holidays and annual leave. If anything, he brought the most upheaval – driving his Mum mad as he regressed to a teenager, treating the place like a hotel. We also journeyed back home twice a week for nursery – with the occasional sleepover at the other Nannys, and a mid week daddy-fix. My days TG was at nursery were spent visiting friends, outstaying our welcome at times! Being littlest Hobos, and doing way too much shopping and hiding of bags. The driving to and fro was a bit of a pain, but in all honesty I felt very lucky to be able to drive away from the building site to the calm and serenity of our temporary haven, so I couldn’t grumble.

The interior work wasn’t for the faint hearted.

The work seemed to slow right down as the kitchen fitting, plastering and decorating got painstakingly close to being finished. Yet the house was somewhat of a death trap with circular saws, drills, paint, tools everywhere.

We had a holiday booked towards the end of June, and we asked the builders to try and get the build to a place we could move home on our return. They pulled out all the stops, and with one final push, we were able to (for the last time) leave the kids at the grandparents, do a militant deep clean, and move the girls home, on week 14 or so of the build project.

The cleaning and unpacking took a few weeks. To be truthful, a few days – I’m pretty intense when I want something done, always have been. The feeling of dust under your finger tips certainly took a lot longer to fade.

Our garden was pretty destroyed too, so we set about getting that sorted in time to let the girls enjoy the remainder of the summer. Mr G did an amazing job of re-turfing the lawn; spending every evening one week preparing it and laying it on a Friday night after a day at work. Star.

Most importantly, the final result? It was amazing. We couldn’t be happier.

It was without a doubt the scariest project – watching your beloved home be torn apart; the work did seem to impact every room of the house at times as boiler pipes, electrics etc were messed around with. The boxes and chaos drove me crazy – as for poor Mr G, how he lived in it I’ll never know. Ultimately, it was worth it. It felt a little like we had moved house when we returned home. Seeing Baby-G crawling around on the floor happily, especially now the evenings grow chillier and darker, we know we absolutely did the right thing. The novelty still hasn’t worn off and we are loving the new space, to enjoy as a family.

The downstairs toilet has been a godsend – TG has already asserted her independence by using it all by herself. Baby-G also has a bit of a thing for it so the door has to be permanently closed.

The utility room is also a fab addition – admittedly, its tiny, but its great to be able to scrub messed up clothes, house our endless piles of washing, and close the door on it all.

There has of course been a huge amount of ‘hiding the bags’ as we filled the lovely new kitchen with lovely things. You’d have to wouldn’t you?! But that’s a story for another day. 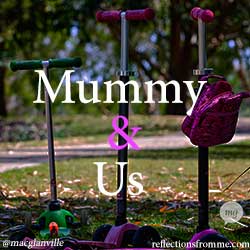 0 thoughts on “Our Big Build; the Finale.”