So this week I stumbled across a TV show on BBC 1 presented by Hugh Fernley-Whittingstall ‘Britains Fat Fight’. I guess like many British folk, these kind of shows don’t always represent anything new, that I don’t already know and as such, often get switched over in favour of some other mindless midweek TV drivel.

But as the hubby disappeared off to watch the footie, and I reached for the remote to catch up on Made in Chelsea, something stopped me in my tracks. 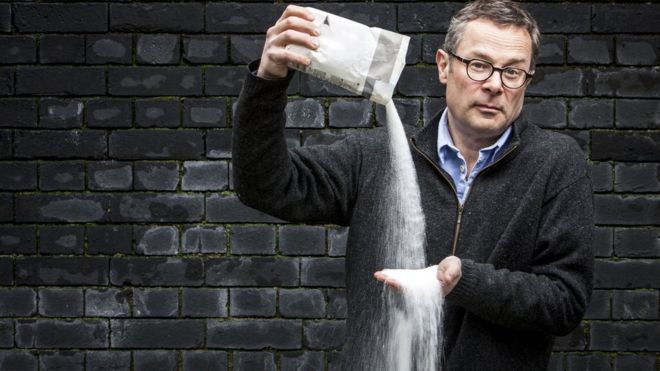 The scene unfolded before me of a bunch of parents and kids, in a supermarket, picking out their favourite cereals, as Hugh started discussing the coloured traffic light symbols on the boxes, or lack of them in some cases.

The thing is, amongst those boxes were our girls favourites, the ones we think nothing of loading them up with every morning before school or nursery, happy that their tummies are full for a day of fun and learning. Honestly, I had never, ever read the sugar content on the boxes before.

In particular, our girls are pretty obsessed with one leading Cereal by a well known brand, and we will regularly buy two for £4 and get through it in an alarming rate. It’s multigrain, it’s aimed at kids, and I’ve never really stopped to think about the sugar content before. Why? I don’t really think I can answer that.

I guess like when it’s a sunny day, and you know you should hang out the washing on the line – it makes sense in every way for the money, the environment, and the irritating noise…you still chuck the washing in the tumble drier. You know it, but you’ve done it so often you rarely stop to think about it. Healthy eating and sugar swap advice is all out there, but you can no longer see the wood for the trees, it’s all just become background noise.

Possibly because the traffic lights are ‘out’ on the box? With no red alarm (actually, having checked I think it would be an orange on our go to favourite), it’s not something that has jumped out at me, and knowing I need to take accountability, I haven’t actively gone off to seek that information out in the small print. It’s my bad.

So armed with a new thirst for this information, the next morning I went on a mission through our cereal cupboard to spot the good guys from the baddies, and was pretty surprised at the results.

Obviously, there were some pretty well known culprits…The chocolate type, the sparkling with sugar type, mainly bought and eaten by Dad muddling through and his insatiable appetite and crazy high metabolism. But amongst the seemingly harmless benign cereals, the facts were surprising. For example, who knew that Bran Flakes contained more sugar than Corn Flakes?

Also, the other point Hugh made, was that all the stats point towards a 30g serving, an an adults reccommended daily amount, RDA. So if you’re generously pouring out a huge bowl of breakfast for your six year old, you can double the sugar and the RDA, and double it again due to the fact your child is probably on 50% of that RDA on the packet. It all starts getting a bit real then eh?

So if you, a bit like me, are horrified at potentially smashing through your kid’s RDA of sugar before 7.30am, and sending them off to school on a sugar high, perhaps it’s time to make some changes.

Things won’t change overnight, and as parents, of course we are challenged by time, money and the stresses of everyday life (let alone the chaos of the pre-school run breakfast table).

Like many families, we consider ourselves healthy. The children aren’t overweight, and neither are us as their parents. We are lucky to be in a situation where Mum is at home, and for the most part has a bit of time to cook up healthy family meals. (Not always, we are far from perfect).

But… changing dietary habits isn’t all about ‘not getting fat’. The stats on obesity in the UK are pretty shocking, and someone with a BMI over 25 is considered overweight. For many of us, that doesn’t appear obese, that appears normal. Yet, this puts you into a category where you are at high risk of diabetes, heart disease, stroke and plenty more other delightful conditions.

So no, our kids aren’t obese, but what they are is influential. Their dietary habits are forming now, and the future of the British Obesity epidemic literally lies in their hands. Or more specifically, as the hand that feeds them, it lies in our hands.

I’m feeling a little bit reborn today, as you can probably tell. I’m also a realist. My kids aren’t ever going to live in a completely sugar free home, and that’s not necessarily the answer here. I’m a firm believer that a little bit of what you fancy does you good, and everything in moderation. I guess what I’m not so okay with is the hidden sugar in every day foods which the girls don’t see as ‘a treat’, they have just come to consume blindly.

Today, I started by weighing out 30g of cereal. I was pretty happy that it wasn’t too far from what I’d routinely give the kids, but when they asked for a second helping, we distracted, we offered alternatives and ultimately gave a tiny amount of a low sugar option.

I’m committed to following through with these lifestyle changes. Maybe the girls may need to believe some of their cereals were ‘out of stock’ at the supermarket again, as they accept this without question and tuck into a far lower sugar content alternative.

Perhaps it’s time to mix up the breakfast routine; a bit of peanut butter on toast, fruits that they can’t get enough of, yogurts, beans or eggs. It’s a nice thought to send them off to a busy day filled with something more substantial than sugar isn’t it?

It’s not just about cereal

As a parent of a vegetarian and a fussy eater, thinking up healthy family meals can be difficult. But we definitely need to up the veg intake, or at least try a little harder to anyway. We know what the kids like, but sometimes we get stuck in a repetitive routine, and even the bits they love now seem so uninteresting. I’m committed to mixing up the veg on offer and trying something new once a week.

As Tig’s has struggled with the vegetarian option at school, we have succumbed reluctantly to allowing her to take a packed lunch. But again, like the cereal, we have fallen into bad habits. The typical format of sandwich, crisps, yogurt, sweet treat, piece of fruit has become the norm. And when she runs out of time, rushes off to play, there’s no prizes for guessing which items end up back at home and in the bin.

So this week we mixed it up. Broke the mould. With a little tub of hummus and a selection of dips, some cheese, fruit and a yogurt. No sweet treats, no crisps. Radical, I know. I pre-warned her and she seemed pretty cool with it, happy even.

And finally, back at HQ I’m thinking a lot about snacks. Particularly with the mouse who has an aversion to anything green and crunchy, we do struggle. She’ll often pick at breakfast, and desperate to feel she has had anything to eat, I’ll often take a cereal bar on the school run so I know she has eaten something. But, after years of using ‘she needs to just eat anything at all’ as an excuse, as she approaches four, it’s time to start focusing on what she eats as much as if she eats. This mornings snack was an apple. She loved it.

If you didn’t see the show, it’s worth catching up on – the WHSugar section is something pretty astonishing! Calling for some of the high street giants to stop pushing confectionary onto it’s customers at every opportunity. If you have young kids, you have probably been a victim of this checkout tactic and it isn’t fun!

To be honest, it’s not just the kids we need to think about – our own eating habits aren’t perfect, so this is something I’m going to try and work at on a family level. We are, after all their role models.

This little thought process is in its infancy with us, and I know there are plenty of subtle changes we can make. But today I’m making one pretty obvious and simple statement too. I chucked a huge box, or sorry, cupboard, of sweets in the bin. You know, the ones you collect after endless kids parties, birthdays, halloween etc. The ones that no one really likes and gets stuck to your hair, sofa etc. If they aren’t there, the simple answer to can I have a lollipop is pretty straight forward isn’t it? A good clear out is pretty uplifting. What’s left is a much more rational amount of leftover easter eggs and one jar of individual sweets. Not an entire cupboard stacked high with stuff we don’t really want the kids to have.

I am a pretty normal Mum, we are a normal family, and I get it. Lives are fast paced, and sometimes when you are about a week overdue going shopping, and the fruit bowl has frankly seen better days, then a bowl of cereal doesn’t seem the end of the world. And it probably isn’t. But when we think about the lengths we would go to as parents to protect our kids from harm, my eyes have been opened to something that’s right under our nose, and it’s time to at least try to change.

If you missed this show, I’d highly recommend catching up whilst it’s available on BBC iPlayer

One thought on “I’m joining Britain’s Fat Fight. Hugh’s with me…”

KEEP YOUR HEAD UP 🌈 The final weekend of lockdo