As we celebrated Dangermouses first birthday a fortnight ago, it was a double celebration in our house. As you already know, she’s always been one to battle every feed, and we could have probably holidayed to Bali on wasted milk costs.

So, it was with great pleasure that the last box of formula was Rugby Kicked out of the door on bin day with a force Jonny Wilkinson would have been proud of.

To tell you the truth, a few weeks before her birthday, I started reducing the volume of formula and adding a splash of cows milk. I have no idea if this was helpful or not, but I did it with Tigs and hoped it might prevent a shock in a different tasting milk on the day of her first birthday.

Great news is, she’s now happily drinking the cows milk, albeit still from a bottle, twice a day. We have successfully got her to take sips from a cow cup (and shower the floor with a sippy cup). So it’s a great start. I think my cup obsession could be in danger of being reignited?…But for now we’re sticking with the winning Haberman Cow Cup.

So, as we say goodbye to our ritual of counting out those little scoops every evening, FOREVER (I think), I thought we should have a look back at this baby stage for all it’s highs and lows.

I exclusively breast fed both the girls until around the four month mark, when I decided I’d done my time – I never really Loved breast feeding; it was okay, but I found it demanding on me and never intended to go for the long haul. Baby two was definitely easier, but after three close consecutive pregnancies, I felt an overwhelming need to have my body back to myself.

We chose the formula brand Aptamil* with Tigs, for two reasons.

1. I was familiar with it having seen my niece fed with that brand.
2. I liked the box packaging. I know, technical right? That is marketing in action!

Tigs took to formula from the very first bottle, absolutely no problem. She’d probably have drank whatever we gave her to be honest. (We didn’t realise how lucky we were).

Starting formula feeding a few months into being a parent is a strange old thing. It’s a little like starting all over again. Sure, I didn’t feel like ANY kind of breastfeeding expert, but I certainly had my little routine going, and our days had a structure that worked.

So there I was, fumbling over some steriliser instructions, opening packets of pristine bottles, and reading the tiny instructions on the back of the formula box. Stressed? Maybe just slightly…

I think it’s fair to say any type of feeding has its down falls…switching from boob to bottle certainly wasn’t going to be the easy ride I thought it would. But, I had made my decision, so I soldiered on and cracked it in the end.

Now, one of my observations as a new Mummy, was the vast expanse of feeding paraphernalia, and the different ways every Mum (or Dad) seemed to roll with their bottle making.

For example…the packaging clearly stated to make each feed up with boiling water, then cool it down. What? Hold your horses… This isn’t how I imagined making a bottle? I had definitely seen Mummies warming bottles up in jugs of hot water? In microwaves? I was confused to say the least.

And so my survey began…to every parent I knew. “How did you do it?”…No I’m not talking cream eggs, or Karma sutra…make up your babies bottles…

Now, the option which caught my eye as the most viable practical method, was to measure out the scoops of powder in advance in these cutesie little containers. (They were purchased quicker than you can type www.amazon.com.) Then, pour out your boiled water into bottles, let them cool. When feed required, mix instantly, to achieve a perfect room temperature feed (which Tigs was fine with). Voila, simples. I was merrily on my way, winning at this bottle feeding malarkey.

For a few weeks that is. Until a family member who is a midwife, spotted this and mentioned that through some training, they’d been told this was a potentially dangerous method…milk powder is not sterile, so the process of adding boiling water is key in ensuring any harmful bugs are eliminated from the feed.

Cue absolute irrational mental breakdown. I cried for days. I thought I’d poisoned my baby. I asked a health visitor to come out and see me to advise me on what the hell I was doing. I should probably be jailed for being such an irresponsible mother.

Snap back to planet earth.

So, back to the drawing board. Again, wondering how the hell I’m supposed to be cooling down bottles of freshly boiled water whilst I’m on a play date? (Tigs was sleeping through without a night feed). Temporarily, the answer lay in the ready made bottles, sold at a premium, but oh so handy. They kept me sane while I gave it some thought. And then, actually, as feeds reduced, it really didn’t cause that much of a hassle. I took a ready made bottle out if I (rarely) happened to be out at feed-o’clock. Not so bad after all.

Top tip: We kept a jug of ice cold water in the fridge, which cooled bottles down super quick, without water going into the lid, in a (vitally) hands free way.

It’s all quite funny to look back at now, but at the time…another story! I know lots of people do use the method I was using, and I appreciate it’s up to each parent to do what they think is best. I just found my Mum-xiety boiled over at this particular issue.

Dangermouse dropped her feeds a lot slower than Tigs, mainly due to her weeny 2nd percentile size. A different challenge ensued when we weaned her from BF’g. She was still having night breast feeds, and soon started screaming constantly after a night breast feed so we had to drop them altogether. Now, even though we had nailed a system, even I couldn’t fathom boiling kettles at 2 am for a wailing hungry baby, waking up the street let alone her sister. Ready made feeds were an option, but 2 or 3 a day was going to be a bit pricey. Especially as most of the milk ended up down the sink.

Now, here I broke my own rules a bit. As a professional in the healthcare industry, following pack instructions is a must. But, so is using a little scientific initiative…

With Dangermouse, we went old school for her night feeds. Make the bottles at bedtime with boiling water: bugs destroyed, chill immediately, and then refrigerate until needed. Warm. Use.

It was with a heavy heart I took that approach, but it made sense to me, and was the historical advised method for years….I certainly felt more comfortable that way than the powder mix way?

These aren’t the only methods I’ve seen friends use. Variations involving cold water, hot water, microwave heating before or after adding milk powder. I think it’s clearly causing a load of confusion.

More recently, a friend mentioned that the boiled water has to cool in the kettle for up to 30 minutes before use. I defensively gave an argument as to why that was ridiculous, and what kind of instruction was that anyway? But, tail between my legs, I googled it and turns out she was right – boiling water can damage some of the good stuff in the formula, so if you can, you should wait until that (exactly) 1 litre of water is cooled slightly. But not too much.

So, all in all, milky formula, I won’t miss you. I won’t miss paying £10 a box for you and throwing you down the sink. I won’t miss beating myself up with Mum guilt about whether each feed is too hot, too cool, too infested with bacteria, vacant of beneficial enzymes. I won’t miss wondering whether my child has had too much or too little. I won’t miss the toddler ‘helping’ me count out scoops, making me constantly question whether I have added one extra, or missed one out…

It’s been a rollercoaster. But, I’m happily getting off now.

*Other brands of formula milk are available. This is not a collaborative post, just an account of my own experience

If in any doubts, always follow the pack instructions for making up a formula feed. This post does not in anyway reccommend any alternative methods and is an account of my own experience only. If unsure, or in a panic like me, seek advice from your health visitor. 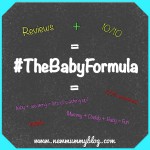 SAME BUT DIFFERENT 🍺 What you may see is a pint

#BABYLOSSAWARENESSWEEK 🌈 You are never far from

PICTURES NOT CAPTIONS ✨ Anyone else ever wish th

RETURN OF THE HIGH STREET 🧡 I read an article t

‘A Comfort zone is a beautiful place, but nothin

COATS & BOOTS 🍁We went into isolation in summer

CONVERSATIONS ON SOBRIETY ✨ The very first, and

MUDDLE COTTAGE 🏡 Having been at home so much la